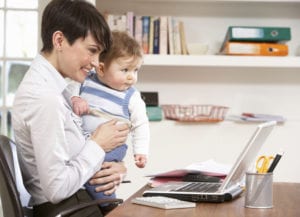 With technology changing the face of a typical working environment, it may come as no surprise to hear that the employment market is increasingly experiencing difficulties when it comes to tax claims made by those working from home. With a growing number of Australians submitting deductions for home office expenses, and not all of them accurately defining their overheads; the ATO (Australian Taxation Office) has decided to pay special attention to claims made for this tax year.

Around 6.7 million taxpayers are believed to have claimed a record $7.9 billion in deductions, with ‘other work-related expenses’ taking centre stage1. This term often covers expenses accrued when working from a home office – and it’s a trend that isn’t likely to dwindle any time soon.

Assistant Commissioner Kath Anderson stated that while the extra costs that relate to working from home can be (and often are) deductible, some taxpayers may attempt to claim private costs that wouldn’t otherwise be considered. This isn’t always the fault of the individual claimant however; there is evidence to suggest that many simply don’t know what they can and can’t request on a tax submission.

There are growing numbers of claims declaring expenses that have not been paid for, or that have been reimbursed by their employer, as well as private expenses and those with no supporting documents regarding transactions.

What can and can’t be claimed for

There are expenses that can legitimately be claimed when working from home – but there is a fine line of definition that needs to be considered. Phone and internet usage can be included, but only for the additional costs associated with the tasks completed for employment.

A wide range of claims expect to be reimbursed for the full amount of these bills, without realising that this essentially means that everyone else is paying for their private phone calls and personal time spent browsing the internet.

The same can be said for electricity usage, but a claimant will need to demonstrate that the additional costs were indeed used (often for heating, lighting and for the charging of devices like laptops). Claims such as these are much more likely to be deemed viable if there is a dedicated work area within the home, validating the claim for work-related running expenses for that space. An employee that simply uses their resources to reply to emails is not likely to enjoy a successful claim.

The depreciation of computers, printing items and stationary are claimable, whereas additional running costs associated with occupancy generally are not. This means that mortgage repayments or rent, property insurance, land taxes and any related rates are not typically covered.

Employers can be called upon to verify expenses, so claimants should be aware that false or embellished statements are advised against.

According to the Assistant Commissioner, record-keeping is going to be one of the key areas of focus for the ATO this tax year – and they are expecting to deny the majority of claims that do not come with recorded information detailing legitimately incurred work-related expenses. Supporting records such as receipts, itemised phone bills and even diary entries will all reinforce a claim’s potential – and although detailed receipts may not be required for phone and internet claims of up to $50 per year, these will still require calculation in relation to deductible use to be considered.

If claimants aim to follow the ‘three golden rules’ as outlined by Kath Anderson, they should be able to enjoy a stress-free application. These are:

The good news is that the ATO feature a handy Home Office expenses calculator on their website to give taxpayers the opportunity to calculate their claim before submitting, as well as a guide to working from home.

While technology is undoubtedly giving more and more individuals the opportunity to work from the comfort of their own homes, it is also giving the ATO the means to stay on top of the ever-changing marketplace. Deploying sophisticated systems and analytics to detect suspicious claims, there has never been a better time for the ATO to hinder the success of those behaving dishonestly.

Over-claiming for a mobile phone bill

A claimant declares that 60% of the cost of their private mobile phone bill is a work-related expense.

Although a non-itemised phone and internet bill for the year is produced as evidence to support the claim, there is no detailed evidence (such as a diary) demonstrating how the amount was decided upon. The employer was also unable to verify the extent to which the private mobile was deemed necessary for use for work.

In this instance, the taxpayer in question had not aimed to provide clear records of use, but the ATO conceded that certain calls were indeed work-related. The claimant was therefore awarded $50 toward the cost of the bill, as this is the maximum that can be allocated without the necessary supporting evidence.

A claimant gets a promotion and during the income year claims home office expenses for electricity and phone use amounting to $1,400.

Upon contacting the claimant, the ATO is offered a letter from their employer confirming that they are required to complete tasks outside of normal working hours. Neither party can verify the time spent working from home, to demonstrate how the amount stated pertains to actual working hours.

The claimant then retracts the original claim, voluntarily disclosing that they lacked records to substantiate the amount stated. Using the fixed rate of 45 cents per hour, based on the hours they had worked at home over the tax year, the claim was reviewed and reduced by 70%.

In this case a penalty would be issued, as the claimant did not take reasonable care when completing their tax return. This could be reduced however, due to the voluntary disclosure of the claimant before an audit could commence.

A claimant works from home during irregular hours to cater to the needs of international clients and submits a claim for a deduction of rent and electricity costs. They provide calculations to support their claim.

In this instance, the living area used to complete work isn’t deemed a functional place of business (as spaces such as home kitchens for caterers would be). This means that although claims for electricity costs may be viable, any application for rent would be rejected.

A penalty would also be issued for failing to take reasonable care when submitting the claim.

As lockdown restrictions begin to ease Australia-wide, a new normal is emerging for businesses and…